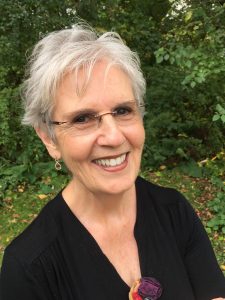 In person or on Blackboard Collaborate by appointment

Survey of the Field of Communication

Principles and Processes of Mass Communication

Joan Walden has been a Lecturer at CCSU since 2009. She began her teaching career in 2002 at Manchester Community College as a public speaking instructor. She also has taught at the University of Hartford and at Tunxis Community College, and has served as president of the West Hartford Chapter of Toastmasters International, winning local and regional contests. She has received awards from the Public Relations Society of America and the Connecticut Advertising Club. One of her films took first place in the Mystic (CT) Film Festival. In 2018 she was named to the CCSU Excellence in Teaching Honor Roll.

Prior to teaching, she headed Joan Walden Enterprises, an event planning/public relations firm for 20 years. Among her clients were the Chicago Mercantile Exchange (Wall Street), the Wadsworth Atheneum Museum of Art, American Paralysis Association, Real Art Ways, CPTV, Community Partners in Action, and the City of Meriden.

Her writing appears frequently in the special sections of The Hartford Courant. She has edited two anthologies for the Jewish Historical Society of Greater Hartford. Readers Digest selected one of her short pieces for publication.

As an instructor, she draws on her experiences as a business owner, filmmaker, and writer, and she enjoys sharing her knowledge with her students. Her overarching goal is to infuse students with a yearning to learn. She has twice taken student groups to Edinburgh, Scotland–her favorite spot on earth. Her Signature Events class, which she developed, is responsible for producing the Lambda Pi Eta communication honor society induction ceremony at CCSU each spring.

In addition to traveling the world, she holds two fitness certifications, inspiring others to improve their bodies as well as their minds. The physical release of endorphins that occurs during exercise can lead to clearer thinking and understanding. She will tell you that lifelong learning and exercise are the ingredients to a satisfying and fulfilling life.