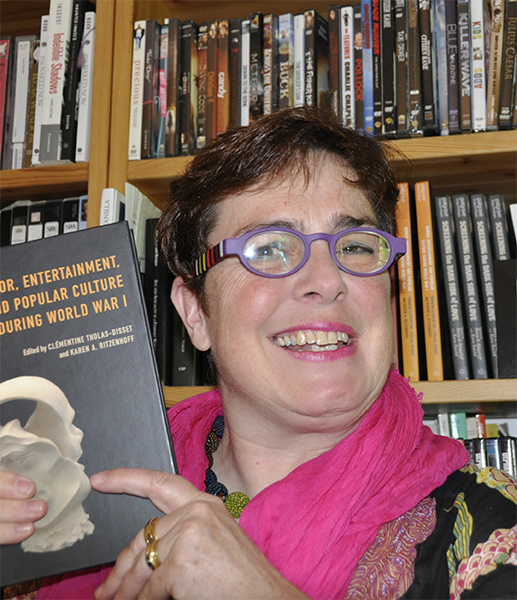 Karen A. Ritzenhoff (Katti) is full professor in the Department of Communication at Central Connecticut State University where she has been teaching since 1994. She is also affiliated as co-Chair with the Women, Gender, and Sexuality Studies Program (WGSS), as well as Cinema Studies and the Honors Program.

In 2019 two co-edited volumes were published. “The Handmaid’s Tale: Teaching Dystopia, Feminism, and Resistance Across Disciplines and Borders” with Janis L. Goldie (Rowman and Littlefield, 2019) features 23 chapters that discuss Margaret Atwood’s dystopian fiction and its TV and Film adaptations to model strategies and social issues of social concern. 16 academics, affiliated with CCSU, are being featured. New Perspectives on the War Film is co-edited with Clémentine Tholas and Janis L. Goldie (Palgrave, forthcoming). This volume addresses the perspectives of marginalized groups who have been written out of the script of mainstream war history.

Ritzenhoff has edited a number of books ranging from timely topics such as Border Visions: Diaspora and Identity in Film (with Jakub Kazecki and Cynthia Miller, 2013), Selling Sex on Screen: From Weimar Cinema to Zombie Porn (with Catriona McAvoy, 2015) to Screening the Dark Side of Love: From Euro-Horror to American Cinema (with Karen Randell, 2012) and Apocalypse in Film: Dystopias, Disasters, and Other Visions about the End of the World (with Angela Krewani, 2015). She has been co-Chair of the Women’s Caucus at the Society for Cinema and Media Studies (SCMS) from 2015 to 2019 and is now co-Chair of the SCMS Special Interest Group on “War and Media Studies” with Anna Froula.

In addition to war studies, future research will continue to center on the films by Stanley Kubrick. Ritzenhoff is currently working on a co-edited anthology on Gender, Power and Identity in The Films of Stanley Kubrick with Jeremi Szaniawski and Dijana Metlić under contract with Routledge for 2022.

During her one year sabbatical from teaching in 2018/2019, Ritzenhoff discovered a new passion for painting in oil, acrylics and water color. Her first show completed the sabbatical with “Morocco Memories” at the Serendipity Gallery in Litchfield, CT in June 2019, featuring pictures and photographs from a trip to Marrakesh and Essaouira in the winter 2019. In April 2020, a solo exhibit of her paintings on Colombia was shown at “Marty’s” in Washington Depot, CT.